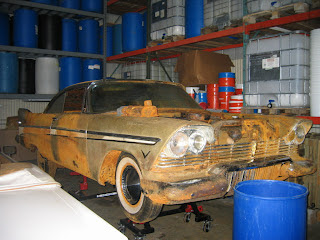 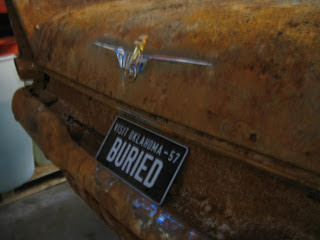 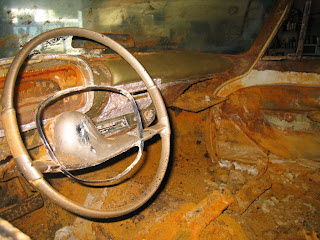 In 1957, a handful of enterprising Plymouth Dealers in Tulsa Okalahoma donated a brand new Plymouth Belvedere to the Tulsarama festival. The car was used as a time capsule, buried during the festival and the people of Tulsa had the opportunity to buy tickets guessing the population of Tulsa in 2007 when the car would be unearthed.
I only know about this because my good friend Mark sent the story to me when they unearthed it. I was studying purses and they put a woman's purse in the car stocked with typical items of the day. The Tulsarama folks couldn't tell me what was in the purse because when they dug up the car, the cement vault was full of water. The car, particularly the interior and contents, were virtually destroyed by a water main break that flooded the compartment years before.
The entire town was wracked with dissapointment. But the good people rallied as a New Jersey company, called Ultra One, volunteered to take on the task of removing the rust and build-up caused by the water. We wanted to see the Miss Belvedere in Tulsa, but since she's inNew Jersey, we saw her there.
I spoke with Dwight Foster, the owner of Ultra One, who said that the process will not restore the car, but rather will remove the damaging crusty stuff and "preserve history" as he put it. He plans to tour the Miss Belvedere to car shows and other venues before returning it to Tulsa and its rightful owners (those who guessed the population).
And, as a bonus, Dwight knew exactly what was in that purse from the records of the time capsule construction: a bottle of tranquilizers, an unpaid parking ticket, a comb, a compact, a lipstick, a lighter and cigarettes, a "rain chapeau," and $3.25 in cash. No credit cards in 1957 eh?
Posted by Kelley Styring at 7:09 AM