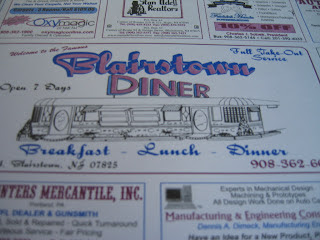 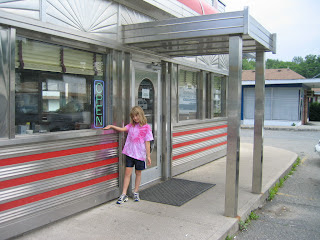 The Blairstown New Jersey is famous for its role in the original Friday the 13th film. A young woman walks through it prior to meeting her predictable fate. But, it should be famous for its hotdogs.

We stop at the Blairstown Diner a beautiful, authentic roadside relic. After admiring the exterior, interior and classic counter stools, we settle in to study the menu. Gillian wants a hotdog.

We don’t eat beef. Not for health reasons, but for political reasons. We don’t like how the beef industry serves up contaminated foods from sickened animals with almost no oversight. We don’t like driving by feedlots that you can smell from miles away and think about the animals living inside. We know other animals are treated similarly, but think you have to start somewhere and for us, beef is it.

“Excuse me,” Steve waves down the waitress. “Can you tell me what meat is in the hotdogs?”

She looks puzzled. “Beef” she hesitates “and Pork, I think.”

I flip over the menu to look at the other kid selections and see that each meal is branded with an animal motif. There is the Giraffe Mac & Cheese, the Squirrel PB&J, and the Monkey Hotdog.

“Apparently, they’re made of Monkey.” I stutter, laughing so hard I can barely speak.

Not a moment later the cook hustles from the kitchen, package in hand. “See, it’s beef. All beef. Good no?” He says with a touch of broken English.

“Yes,” says Steve “Good, no.” We’re all laughing which leaves the cook a bit confused. He works his way back to the kitchen.

No one orders a hotdog.
Posted by Kelley Styring at 8:05 AM