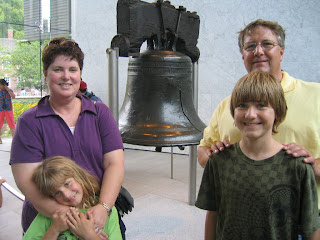 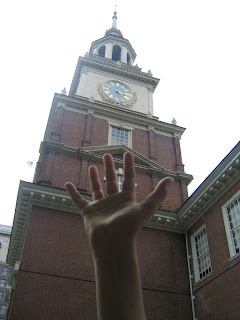 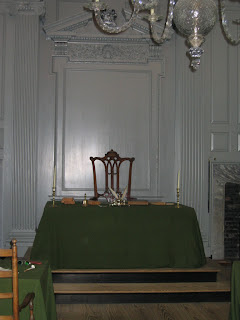 I’m feeling a bit like a curmudgeon as I leave Philadelphia’s City Hall without seeing the view of the city from under William Penn’s shoe. Years ago I found this tower by following small signs painted on the floor of the massive 1870s structure that said “to the tower” with a line to follow. “Heck yeah,” I said in 1982 and followed it to a surprise and delight – a rickety elevator with a rickety elevator operator who said “you want to go to the tower? Well, okay.” And, off we went on a harrowing 548 foot high ride to see the city from a chain link cage – a real experience that is now a gift shop ticketed, scheduled, guided tour that costs $10 per person. Turning this oddity into an attraction, sanitized and tailored for tourism has stipped it of its charm and, for me, this turns it into a pass for this trip. Bummer.

We’ve seen this often on our cross country journey – state parks, national parks, and even monuments where you have to pay to see history that “we the people” already own. I know it’s more mature to think of this as paying for maintenance, but in our society of spoon-fed infotainment shouldn’t we encourage visits to places where you can actually learn about real, historic events without a financial disincentive?

Philadelphia still has two such gems: The Liberty Bell and Independence Hall. The Bell, once the Pennsylvania State House Bell is a man-made marketing hook for the new idea of liberty that our founding fathers were selling. This was a campaign whose success permeates our culture to this day. And, by the way, it does give you a little chill up the spine to see it up close – really, and I’m a skeptic about this type of thing.

Independence Hall is a hallowed place – protected from damage by guards and from ignorance by some of the most knowledgeable and genuinely enthusiastic park service employees in the country. Our guide engaged us in the torrent of this moment in history, peppered his tale with descriptions of the penalties for treason, and linked to our present experience by evoking the film National Treasure set in part in this room. And, that’s no small task because let’s face it, it’s a conference room – desks, chairs, books, pens, etc. A PC projector and some molding is all that separates this room from every conference room you’ve ever seen. That is, until you realize that George Washington sat in that chair while the framers decided there should be an executive branch. Though the cost of our freedom was high, the admission to this tour is no charge. And, that’s Priceless.
Posted by Kelley Styring at 6:05 PM

A very happy 4th to your family, as you appropriately spend it in "The Birthplace of the United States." Found your journey featured in USA Today as well. Very cool!

I'd love to see the picture of the inside of that Honda when you're through with it! Good luck on the home stretch.

Usually I torture my children with a reading of the Declaration of Independence. It's the price they pay before setting off a few driveway fireworks. This year they got the real deal. And, it was cool, even to them.

Yep, we trashed the car. We turned it in with dirt from every state and a little bird poop to boot. And, the inside was a big mess. We cleaned out the trash, but not before taking photos. I'll post those soon. cheers!